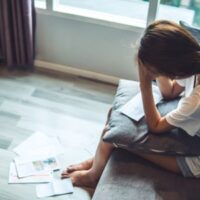 Everyone knows that financial problems can lead to the ruin of a marriage—but can the reverse be true, as well?  Can marital problems lead to financial ruin?  Plenty of people think so.  In fact, of those surveyed reported that divorce had been a primary factor in their financial insolvency.  Respondents between 40 and 49 years old, in fact cited the collapse of their marriages as a primary cause of their insolvency in 20 percent of cases.  The question then, is why divorce can destroy one’s financial security and lead to bankruptcy?

Divorce Can be the Last Straw Financially

For couples who are already struggling financially, divorce can stretch the dollar beyond its capacity.  The cost of the divorce itself—thousands, and sometimes tens of thousands of dollars—piled on top of already strenuous debt, can be just too much to handle. But there’s more to it than just the legal costs involved in divorce.

Back to Single Living

Sharing a home and living expenses was one way to limit debt.  The cost of two separate homes, and all that goes with it, can be a real shock.  The same amount of money is now required to cover living expenses, rent, utilities, and so forth– for two places.  If the budget was tight before the split, it’s even tighter now!

When people first move out of the family home, there are often cash requirements that are inordinately high.  If you don’t have much in savings, how do you come up with first and last month’s rent?  What do you do for furniture?

And what about the homemaker who is used to staying home with the kids while a spouse took care of providing for the family?  When that spouse moves out, how does a homemaker raise the children and make a living?  Sure, there may be child support and spousal support coming in to help, but it’s often not enough to make ends meet.  Even if it is enough, how safe is it to rely on your ex to continually make those payments?  Financial independence is much more desirable, if less easily achieved. That’s probably why 30 percent of women who file for bankruptcy are divorced. That’s in comparison to men, 24 percent of whom are divorced. Sadly, nearly one-third of females who wind up filing for bankruptcy are single parents.  That’s markedly higher than the rate for males, eight percent of whom are single parents.

Shared debt during a marriage doesn’t disappear in a divorce, by the way. Both parties are equally responsible for that debt.  Even if a spiteful spouse racks up a bunch of debt on the way out the door, it can impact both people’s credit, and both people will be on the hook to pay it back.

Has divorce left you financially reeling?  Now is the time to talk to a professional.  At the Law Office of Julia Kefalinos, our Miami bankruptcy attorneys understand your situation, and can help you to move forward. Schedule a confidential consultation in our office today.