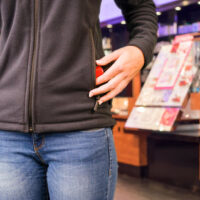 If you have been charged with theft, you are likely frightened when you consider the penalties associated with a conviction in Florida.  And you should be concerned:  you could wind up with fines, and even time behind bars.  What you need now is an experienced and committed criminal defense lawyer right now.

The Facts About Shoplifting

If you’re facing charges associated with shoplifting, you’re not alone!  Estimates have it that  one in every 11 people is guilty of stealing something from a store at one time or another.  That means nearly 30 million shoplifters are wandering through stores at any given time.  Many of those people are repeat offenders, resulting in some startling statistics:

While there is no actual shoplifting charge in Florida law, shoplifting is generally referred to as retail theft, and will be charged as either petit or grand theft.  The value of stolen items determines which charge is appropriate, with merchandise totaling under $750 considered petit theft, and items above that amount being grand theft.  Interestingly, the majority of shoplifters who are caught have taken $200 or less in merchandise.  The National Retail Federation notes that the most commonly pilfered items include things like Red Bull energy drinks, weight loss products, chewing gum, and cosmetics.  As small as these items seem in value, retailers are completely within their rights to detain individuals suspected of shoplifting.  Civil and criminal charges may result.

A Lawyer who Knows the Ropes

Certainly, every case is different, and previous history, the retailer’s efforts to persuade a prosecutor, and other circumstances will all play a part in the outcome of shoplifting cases.  At The Law Office of Julia Kefalinos, our Miami criminal attorneys understand the variables in these cases, and know how to maneuver within the justice system to achieve the best possible outcomes for our clients.  Schedule a confidential consultation in our office today.