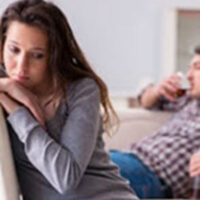 Is there a connection between intimate partner violence (IPV) and substance abuse? While the two exist in tandem quite often, there are plenty of instances where one or the other occurs and the other does not.  Furthermore, there are cases where the two issues present themselves in a relationship, and the violence continues even if the substance abuse stops.  The general consensus, then, is that while these issues are, indeed, correlated, and a violent abuser who also abuses substances often becomes increasingly more violent, there is actually no causal relationship between substance abuse and domestic violence (DV).  That being said, when the two issues occur together, they both need to be addressed, albeit very differently, the domestic violence being the primary issue of concern.

It is crucial to understand the basis of DV in order to provide the most effective interventions.  The singular root incentive for domestic violence is the need to control.  The assertion of power through coercive emotional, financial, mental, or physical activity occurs as a result of the abuser’s choices.  In contrast, substance abuse is the direct opposite, in that it is the result of a loss of control.

While domestic violence occurs during moments of both sobriety and when the individual is under the influence, abusers are aware of their behavior, and may use their addiction as an excuse for coercive or violent behavior. To be sure, drugs and alcohol do allow buried feelings of rage to break through, and those feelings may take over when the abuser is experiencing fewer inhibitions and poor judgment as a result of those substances. Nonetheless, the abuser is responsible for aggressive words and actions.

Why are they responsible for the abuse, despite addictions that correlate to the behavior?  The answer is simple: while addiction is a disease, DV is a choice. Period.  Yes, there may be deep seated emotional trauma that leads someone to violence, but domestic violence is always a choice, and is never justified.

Substance abuse requires treatment, pure and simple. It is an illness. DV is illegal, and requires education, accountability, and intervention, often court ordered. Survivors of DV frequently require assistance in escaping dangerous relationships and should learn of the resources and services that are available in their communities. Additionally, the perpetrators of violence may require a restraining order to keep them at bay. Accountability for them often means time behind bars and losing the object of their control–their victims– altogether.

When addiction and abuse team up the results can be disastrous.  If you have been subjected to them, you need help now more than ever.  At The Law Office of Julia Kefalinos, our Miami domestic violence attorneys know the legal strategies to build a wall of protection around you. Schedule a confidential consultation in our office today.