The Financial Implications Of Domestic Violence 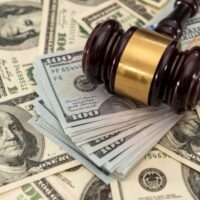 There is no question that domestic violence—often referred to as intimate partner violence—has daunting impacts on victims. !0 million individuals experience domestic violence every single year in this country, and battle with the physical, mental, and emotional damage long after any specific incident occurs. The impacts don’t stop there, though.  The Institute for Women’s Policy Research (IWPR) reveals that survivors also face serious impacts to their education and careers, and ultimately to their economic growth and stability over a lifetime.

What are we Talking About?

When it comes to domestic violence, we know that one-third of women and one-fourth of men have been the recipient of some form of physical violence at the hands of a loved one. That being said, domestic violence encompasses more than physical threats, and includes verbal and emotional abuse, digital and financial abuse, sexual abuse and coercive tactics related to reproductive choice. These combine to cost society over three and a half trillion dollars annually.  Individual costs mount, as well, and female victims experience a lifetime cost of over $100,000, while males lose roughly $25,000 over the course of their lives.

Breaking it Down: Individual Costs

How do these costs add up?  Consider the following:

With an estimated 8 million paid workdays lost to domestic violence, the country loses both money in the marketplace and productivity and creativity that victims are unable to provide. Additionally, millions of victims of abuse require hospitalization and medical care, costing trillions. Counseling, job training, housing and security for those who leave their abusers add up too.  The full magnitude of the cost of social services is not clear—but we know hundreds of millions of dollars are funneled to a variety of resources.

Domestic violence, and all of the ugly impacts of it, are all too lasting and real.  If you are in a dangerous relationship, the time to seek help is now.  The compassionate, capable Miami domestic violence attorneys at The Law Office of Julia Kefalinos are prepared to help.  Schedule a confidential appointment in our office today.