Have You been The Victim Of Racial Profiling? 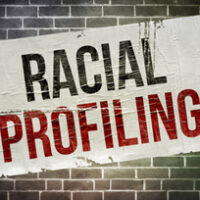 If you are a person of color, you’ve no doubt been paying close attention to recent discussions about the crime of driving while black; and if you feel like you’ve ever been targeted due to your appearance, you’re likely infuriated over unlawful stops and searches. It happens more often than some people may think.

According to the American Bar Association (ABA), when police base their decision to engage—or to even suspect someone– based on their race, ethnicity, or apparent religion, they are racially profiling. Even if there are other legitimate factors coinciding with the officer’s decision to stop, question, frisk, or otherwise interact, racial profiling is underway when a person’s appearance plays into decision making.

Wrong. Those who support the practice claim that it helps police departments place a laser-like focus on crime, rooting out criminals before the crimes become more serious.  Their proof is the fact that people of color are disproportionately represented in prisons and jails across the country.  But evidence discrediting the effectiveness of racial profiling tells us otherwise.  One study looked at stops and searches where police were looking for guns, drugs, and other forms of contraband.  The number hits—or successful confiscations– were recorded. It turns out that police had significantly more hits with white people than with Blacks or Latinos.  In no way did racial profiling result in more effective or better crime fighting.

The Florida legislature specifically prohibits racial profiling by law enforcement personnel.  Even so, according to The U.S. Census Bureau, nearly half of people incarcerated in Florida’s state prisons are Black.  This, even though only 17 percent of the population of Florida is Black. Clearly, racism, discrimination, and profiling are a serious problem in the state.  Sadly, Black teens face some pretty somber statistics:  the likelihood of arrest is fourfold that of their white peers.  Often these arrests are for school misbehavior that leads to charges of disorderly conduct—a charge that Black students face seven times more often than white kids do.  And the trends continue into adulthood.  Defendants arrested in Black sections of Miami-Dade face higher rates of pretrial detention, higher rates of conviction, and higher rates of incarceration than other neighborhoods in Miami-Dade. Truly, studies bear out the fact that higher incarceration rates in the Black community is not due to higher rates of violent crime.  Rather, people of color are simply more likely to receive prison sentences for nonviolent crimes, despite having no previous convictions.  Incredibly, even when two friends—one white and one Black—commit the same crime together—the Black defendant is statistically likely to serve a longer sentence than the white one.

When communities suffer a lack of trust in law enforcement personnel, needs go unmet as tensions simmer.  As individuals of color are taken out of their neighborhoods and incarcerated, families are disrupted, at a huge fiscal note that impacts Floridians across the state. Simultaneously, as law enforcement invests time and resources policing people of color, legitimate concerns elsewhere are not being addressed.

Has Your Color Impacted Your Treatment?

If you believe you have been the victim of racial profiling, your feelings of resentment are well founded.  The experienced and determined Miami criminal attorneys at the Law Office of Julia Kefalinos are poised to assist.  Schedule a confidential consultation today.