Trial By Judge Or By Jury: Which Is Best For You? 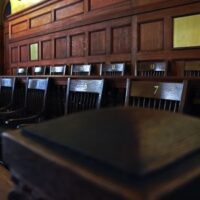 If you are headed to trial on criminal charges, you have some big decisions ahead, not the least of which is whether you should opt for a judge or a jury.  What factors should you consider as you make this hefty decision? There are certainly pros and cons to either choice.

Choosing to go with a Judge

If you opt to forego your right to be tried before a jury of your peers, you’ll have what is commonly called a bench trial, meaning a judge will not only be in charge of making rulings throughout the course of the trial; he or she will also be responsible for deciding your innocence or guilt. The upside of this is that you will most likely get a verdict based on the facts of the case, not based on an emotional reaction to you or the information revealed during the trial. A judge will not struggle to understand the legal standards involved, and will be able to sift through the evidence relatively unencumbered.  As a result, your trial may proceed more quickly, meaning it’s less costly for you.  On that note, a bench trial means you won’t have to spend time– and consequently money—choosing a jury and preparing jury instructions. On the other hand, a bench trial means you are putting your future in the hands of one individual. The judge will be privy to everything that occurs during the trial, unlike a jury that might get excused when controversial topics come up. Can you count on the judge to ignore evidence that has been adjudicated as inadmissible? A judge is trained to ignore emotions and block out that which is not a part of the record.  That being said, any judge is only human.

If You Prefer a Jury Trial

Jurors can sometimes rely on their emotions more than the facts of the case, which can be a problem for individuals accused of particularly egregious actions. Additionally, jurors are just laymen, serving a public duty.  Most will have little or no background with legal terminology, making them vulnerable to misunderstandings when it comes to the validity and weight of evidence or adhering to the judge’s instructions.  Nonetheless, oftentimes jurors feel more compassion toward a defendant than a judge might, making the art of persuasion a valuable skill for your defense attorney to have. And they frequently rely more heavily on the gist of the case than on minute details.  They look at the big picture, and are sometimes susceptible to chronicles presented by the defense that make sense to them, even if every single detail doesn’t fit perfectly into the narrative.

So what is the best option for you?  At The Law Office of Julia Kefalinos, our knowledgeable Miami criminal attorneys can analyze your case and help you come to the best possible decision.  We are dedicated to pursuing the best outcomes for you.  Schedule a confidential consultation in our office today to explore the possibilities.