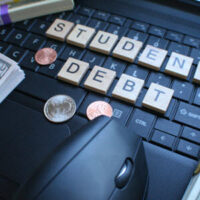 Student loan debt presents a unique challenge if you are thinking about filing for bankruptcy. Most student loans are considered non-dischargeable in a Chapter 7 or Chapter 13 case. In other words, even if you successfully complete the bankruptcy process, you still have to pay back the student loans. The bankruptcy court can make an exception, however, if you can prove that repaying your student loans would “impose an undue hardship” on you and your family.

Court: A Student Loan Is Not an “Educational Benefit”

A recent decision by a federal appeals court in Denver has also raised the possibility that many obligations currently treated as “student loans” may not even be subject to the non-dischargeability rule in the first place. The debtors in this case are a Colorado couple who filed for Chapter 13 bankruptcy in 2009. After completing a court-approved repayment plan, the bankruptcy judge granted a discharge in 2015, noting that “debts for most student loans were discharged,” without specifying which loans were covered.

Navient Solutions, one of the country’s largest private student loan servicers, continued to add principal and interest to the debtors’ pre-bankruptcy loans, which totaled more than $200,000. The debtors then moved to reopen the bankruptcy case and confirm that their Navient loans were lawfully discharged.

The Tenth Circuit’s ruling turned on Navient’s attempt to classify the debtors’ outstanding private student loans as an “an obligation to repay funds received as an educational benefit, scholarship, or stipend.” This is separate from language in the code specifically applicable to government-backed and private student loans. Indeed, the word “loan” never appears in this section. So Navient’s argument rested on its belief that the money the debtor borrowed was “funds received as an educational benefit.”

The Tenth Circuit rejected that interpretation. The Court said Congress used this particular language in the Bankruptcy Code to describe other funds that someone might use to attend college, such as the GI Bill. To describe a student loan as an “educational benefit” was stretching the English language beyond its natural meaning, the Court said. For instance, nobody “would say that mortgages are housing benefits or that automobile loans qualify as transportation benefits.”

Although the Tenth Circuit’s ruling is a solid victory for the debtors, its overall impact on bankruptcy law may be limited for now. For one thing, the Tenth Circuit only encompasses a handful of western states, and its decision does not bind any of the other federal judicial circuits.

More to the point, this case dealt with a specific subset of private student loans that were not covered by the Bankruptcy Code’s broad protection for both public and private loans. That is to say, this ruling does not help anyone who is struggling to pay back a student loan backed by the federal government, or even a private loan used to cover the cost of attendance at an accredited college or university. That said, if you have an outstanding loan that was used to pay for a non-accredited private school, this decision might prove useful.

If you need legal advice on how to deal with your own student loan situation from a qualified Miami Chapter 13 bankruptcy lawyer, contact the Law Office of Julia Kefalinos today at 305-676-9545 to schedule a free consultation.